Ok. Lets set the scene, Myself, Mollie, Danielle & Jessica… SHOCK i’m actually the first one waiting at Angel Station. 10 minutes later theres 4 wheely suitcases and excitement flowing through our veins… Get to the hotel, bags in the room, little wander around town and a spot of cheeky nandos 😉

Heaton park was rammed, full of mud, sludge everywhere and torrential rain, but that didn’t stop the festival goers coming out full force in ponchos and it definitely did not sway me from seeing my favourite artists.

I think its fair to say that Parklife had accepted the recent surge of Grime artists as Grime really was a dominant genre at the festival this year with the likes of Stormzy and Skepta headlining on the main stage, not forgetting the BBC 1XTRA stage which saw Section Boyz shellinggggg and the raving crew vybzin to the sounds that  legend Mistajam was supplying.

Sadly I missed Kano and Bugzy Malone’s performance, but was pleasantly surprised to see Elf Kid & Blakie  from The Square belting out their recent bangers on top of the Nando’s hut.

Kurupt FM consisting of members named above had the crowd going mental with their easy, repetitive garage flow. Fans alike came together to scream out some of the crews most notable lyrics

HAHA! I swear I love KuruptFM.

Hannah Wants made a very big impression on me, embarrassingly this was the first time I had listened and was completely in awe. everything was on point, beats, sound, speakers, flow, tunes, order. everything. SMASHED IT.

STORMZY. I don’t even know where to start, his energy on stage is astonishing. Constantly up and down the stage hyping up the crowd, mc’ing some of the best tunes that have come from the grime genre, remixing his bars with some old skool riddims… as a grime fan you couldn’t want anything more from the boy, however parklife’s sound system should have been turnt all the way up #PROBLEM. 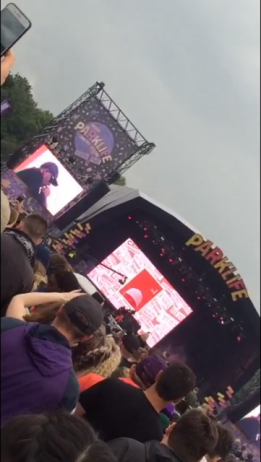 I must say DJ EZ had the masses. Nowhere to stand, nowhere to sit, but fans were completely loving life, starting off with some Garage club classics and streaming sick mixes with current favourites by Drake.