Laughta teams up with an array of talented grime artists for new video ‘Couple MCs’! 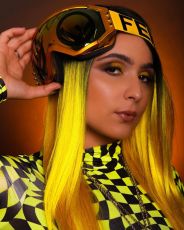 This one is a real energetic offering that highlights Laughta’s lyrical talent, as well as introducing the other gifted MCs on the visuals. Directed and filmed by Shan Brown, the fiery video shows that the ladies can go just as hard as the guys.

Along with the release, Run the Mic will be running a challenge on their app the following day, giving other artists an opportunity to upload their bars with a live instrumental.

Laughta’s upcoming mixtape is said to showcase a different side to the Lebanese MC and with more new music dropping imminently, stay locked for what is sure to be one of the projects of the year.

The MC is also currently featuring in BBC3 documentary, ‘Galdem Sugar’, which is a 6-episode series, following the lives of strong women in the Grime scene. Each week, the Galdem Sugar unveils a no holds barred podcast for BBC Sounds, shining a light on what it’s like being a female artist in a male skewing industry. The series also follows the likes of C Cane, Madders Tiff, Cassie Rytz and Pre Wavy.

2 thoughts on “Laughta teams up with an array of talented grime artists for new video ‘Couple MCs’!”